Below are comments published by the Norwegian Embassy in Korea (Seoul) in connection with the delivery of our two vessels, the Nordic Star and Nordic Space.

On Wednesday the 24th of August, the chargé d’affaires a.i. of the Norwegian Embassy, Ms Marianne Damhaug, attended the naming ceremony of two new ships: the Nordic Star, and Nordic Space.

The two vessels are owned by Nordic American Tankers Limited (NAT) founded and chaired by Norwegian businessman Herbjørn Hansson. The company was founded in 1995, with offices in Bermuda, Oslo and  and Sandefjord, Norway. Hansson’s involvement with Korean shipbuilding began in the 1980s, and 24 out of 30 tankers owned by NAT were built in South Korea. Mr Hansson was present at the naming ceremony, along with the ships’ two sponsors, Ms Marianne Lie, and Ms Siv Helset.

Ms Lie has extensive experience from the shipbuilding and offshore industry, and is currently the Executive Vice Chair of Herbjørn Hansson’s company, Nordic American Offshore Ltd. Ms Helset is a Norwegian lawyer with experience with legal counselling in the industry. The two ships being named were both built by Sungdong, one of the world’s leading shipyards. NAT ordered the ships built by Sungdong in December 2014.

The occasion of the naming of the ships was marked with the attendance of guests from both Norwegian and Korean parties. As a part of the celebration, Nordic American Tankers donated 10 000USD for each ship, intended for the care of the elderly, disabled and less fortunate in the region.

In an effort to minimize the environmental impact of their vessels, and to adhere to increasingly strict international environmental regulations, both ships are built with energy-saving designs, and are consequently able to consume up to 10 % less fuel.

While Nordic Space is still awaiting completion in the shipyard, Nordic Star will sail its first operation in early September. 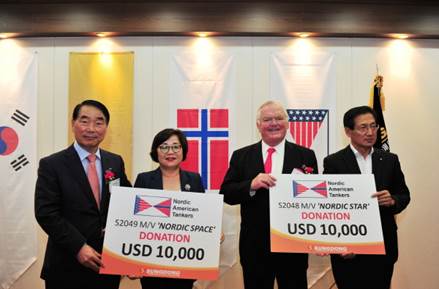 The forward-looking statements in this press release are based upon various assumptions, many of which are based, in turn, upon further assumptions, including without limitation, our management’s examination of historical operating trends, data contained in our records and other data available from third parties.  Although we believe that these assumptions were reasonable when made, because these assumptions are inherently subject to significant uncertainties and contingencies which are difficult or impossible to predict and are beyond our control, we cannot assure you that we will achieve or accomplish these expectations, beliefs or projections.  We undertake no obligation to update any forward-looking statement, whether as a result of new information, future events or otherwise.

Important factors that, in our view, could cause actual results to differ materially from those discussed in the forward-looking statements include the strength of world economies and currencies, general market conditions, including fluctuations in charter rates and vessel values, changes in demand in the tanker market, as a result of changes in OPEC’s petroleum production levels and world wide oil consumption and storage, changes in our operating expenses, including bunker prices, drydocking and insurance costs, the market for our vessels, availability of financing and refinancing, changes in governmental rules and regulations or actions taken by regulatory authorities, potential liability from pending or future litigation, general domestic and international political conditions, potential disruption of shipping routes due to accidents or political events, vessels breakdowns and instances of off-hires and other important factors described from time to time in the reports filed by the Company with the Securities and Exchange Commission, including the prospectus and related prospectus supplement, our Annual Report on Form 20-F, and our reports on Form 6-K.