Nordic American Tankers Ltd (NYSE: NAT or the “Company”) communicated its view on the new Sulphur requirements, effective from 2020 in our Press Release October 24, 2017 and in a NAT conference call held February 20, 2019. The Company is steadfast on its decision that scrubbers are not a solution for NAT based upon a conservative financial policy. NAT does not take on risk it does not have to.

An increased number of ports now prohibit or impose strict requirements on the use of scrubbers, which purify emissions from large ships. The scrubber cleans the exhaust from vessels for Sulphur and emit impure water into the sea, and that is what the ports now will put an end to.  Therefore, we still do not see that this new requirement is an issue for NAT.

According to Reuters of yesterday, the Norwegian authorities may ban the use of scrubbers. It is indicated in the Reuters message that a worldwide ban may become in effect.

Press Release October 24, 2017.In this press release it was stated that discussions about the sulphur requirements for bunker consumption on ships to be in effect from 2020.  Our 33 (which NAT had at the time) Suezmax tankers are fully compliant to run on 0.10% sulphur content or less.  Therefore, going forward we do not see that this new requirement is an issue for NAT.

The same scrubber considerations were discussed at the NAT investor conference call February 20, 2019. 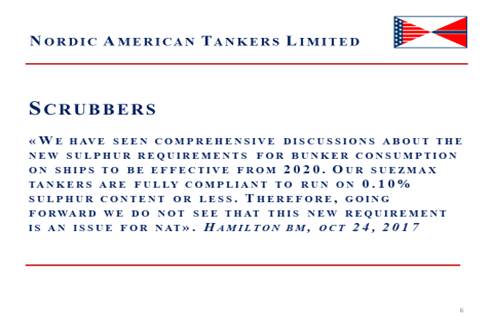 Now, a ban on so-called scrubbers is also being considered in Norway, according to Reuters.

An increasing number of ports around the world prohibits the use of scrubbers, which purify emissions from large ships. The news agency E24 wrote a few days ago how the industry believes that ships without scrubbers could be exposed, as more and more customers demand lower emissions from their shipping partners.

Now comes the news that several ports consider banning scrubbers. The point of the scrubbers is that they clean the exhaust from the ships for sulphur. The consequence is that the ships pump impure water into the sea – and that is what the ports will now put an end to, writes Reuters.Also in Norway, a ban on the use of scrubbers that emit unclean water into the fjords is now being considered. E24 refers to a non-named source in the Ministry of Climate and Environment.

It is a question whether all types of scrubbers may be prohibited.

The International Shipping Organization (IMO) has decided that the limit for sulphur content in fuel used in shipping should be reduced from the current 3.5 per cent to 0.5 per cent.

We cannot say for certain what the outcome can be expected to be. We feel confident, though, that the view of NAT communicated explicitly Oct 24, 2017, is the right avenue forward.

Whether a worldwide ban may become relevant, remains to be seen.

The Company desires to take advantage of the safe harbor provisions of the Private Securities Litigation Reform Act of 1995 and is including this cautionary statement in connection with this safe harbor legislation. The words “believe,” “anticipate,” “intend,” “estimate,” “forecast,” “project,” “plan,” “potential,” “will,” “may,” “should,” “expect,” “pending” and similar expressions identify forward-looking statements.

The forward-looking statements in this press release are based upon various assumptions, many of which are based, in turn, upon further assumptions, including without limitation, our management’s examination of historical operating trends, data contained in our records and other data available from third parties.  Although we believe that these assumptions were reasonable when made, because these assumptions are inherently subject to significant uncertainties and contingencies which are difficult or impossible to predict and are beyond our control, we cannot assure you that we will achieve or accomplish these expectations, beliefs or projections.  We undertake no obligation to update any forward-looking statement, whether as a result of new information, future events or otherwise.

Important factors that, in our view, could cause actual results to differ materially from those discussed in the forward-looking statements include the strength of world economies and currencies, general market conditions, including fluctuations in charter rates and vessel values, changes in demand in the tanker market, as a result of changes in OPEC’s petroleum production levels and worldwide oil consumption and storage, changes in our operating expenses, including bunker prices, drydocking and insurance costs, the market for our vessels, availability of financing and refinancing, changes in governmental rules and regulations or actions taken by regulatory authorities, potential liability from pending or future litigation, general domestic and international political conditions, potential disruption of shipping routes due to accidents or political events, vessels breakdowns and instances of off-hires and other important factors described from time to time in the reports filed by the Company with the Securities and Exchange Commission, including the prospectus and related prospectus supplement, our Annual Report on Form 20-F, and our reports on Form 6-K.